The Devil’s Challenge
Mik Carr reports:
The Challenge started in Winchester on Saturday, 4 May. Day one was scheduled to be 30 miles, over undulating ground. Lots of 600 foot+ ascents and descents on technical surfaces. Weather was perfect, and the entrants an eclectic mix of racers. Great to report, 49% female entry!  At mile 15, I tripped and headbutted the earth – sometimes being thickskulled is an advantage. Sadly, I broke my right hand and fingers but carried on, despite a thickskulled two mile wrong turn.  Back on track. I finished the day 55th (1st MV60), after running 33+ miles, swiftly followed by a trip to A&E.

Great Yarmouth 5 Mile Promenade race#2
Ken Hurst reports:
A bumper (record?) 61 Black Dogs were at the seaside on Wednesday where they represented more than 10 per cent of the 500-strong field for the second of the three race series.
Threatening skies held at bay by a brisk wind did nothing to dampen the prospect of stand-out performances that included a host of well won and deserving places on the age category podium.
Joseph Smith led the Black Dogs home with his time of 28:15 securing fourth place overall and a first in his 15-17 age category. He was closely followed by Harry Allcock, sixth overall and second in the same age category. Justine Fawcett was first Black Dog lady to finish and was first F45-49 while Terry Garritty was first M65-69 and Christine ‘Potty’ Muttitt first F70+.  Jon Wiles was second M45-49, Jo Cox second F45-49 and Sabrina Norton second F40-44.  Maria Goodby was third F50-54 and Hazel Garrity third F60-64.  The full results are here. 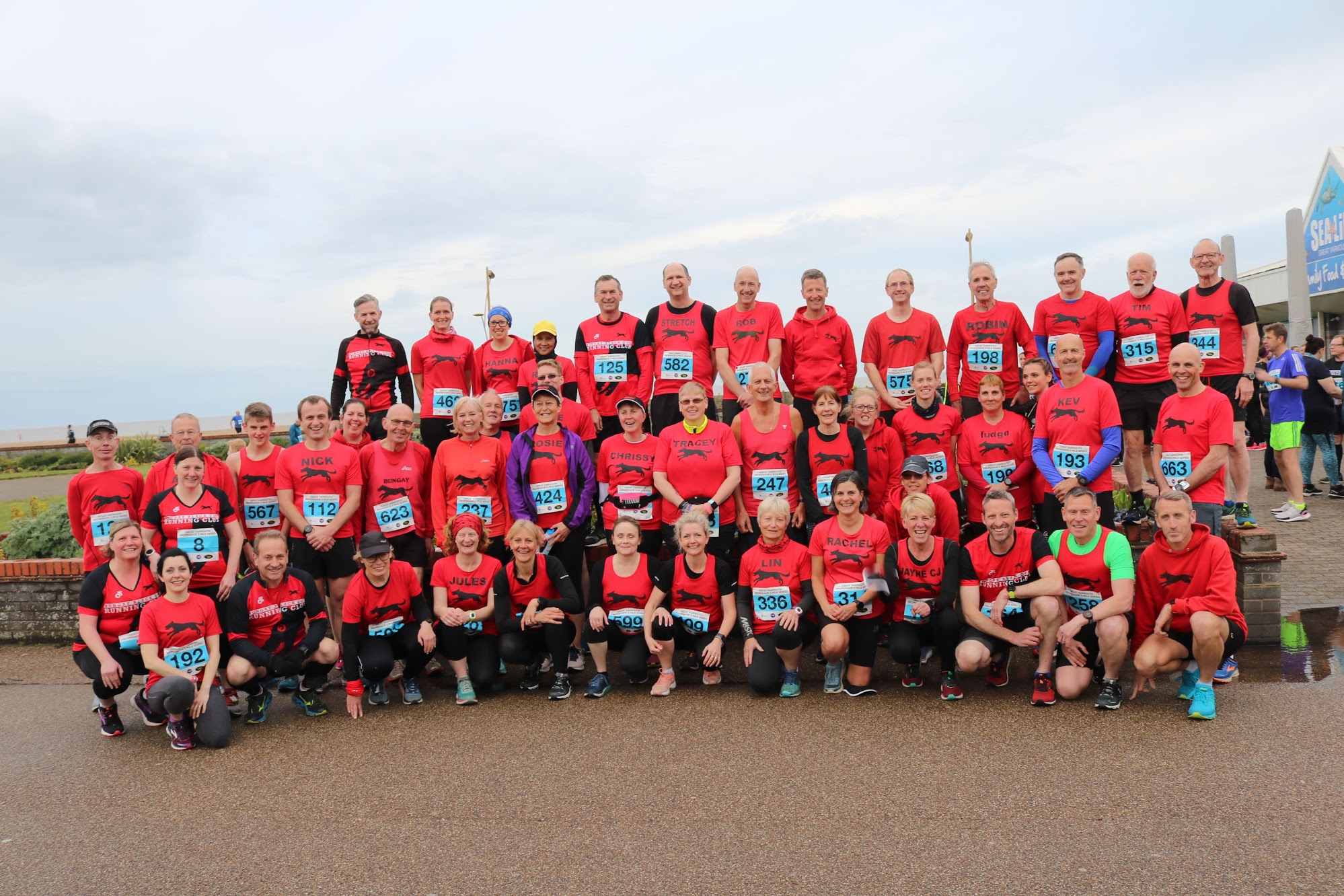 Henham Festival of Running
Tony Morley reports:
The weather today (Sunday) suited the Latitude vibe at this new event with it’s 1, 5 and 10k options on farm tracks and grassland.  The registration and toilet provision needs tweaking for next year but great potential to be a calendar favourite.  A good turnout of Black Dogs enjoyed the refreshments afterwards.  No results as yet. 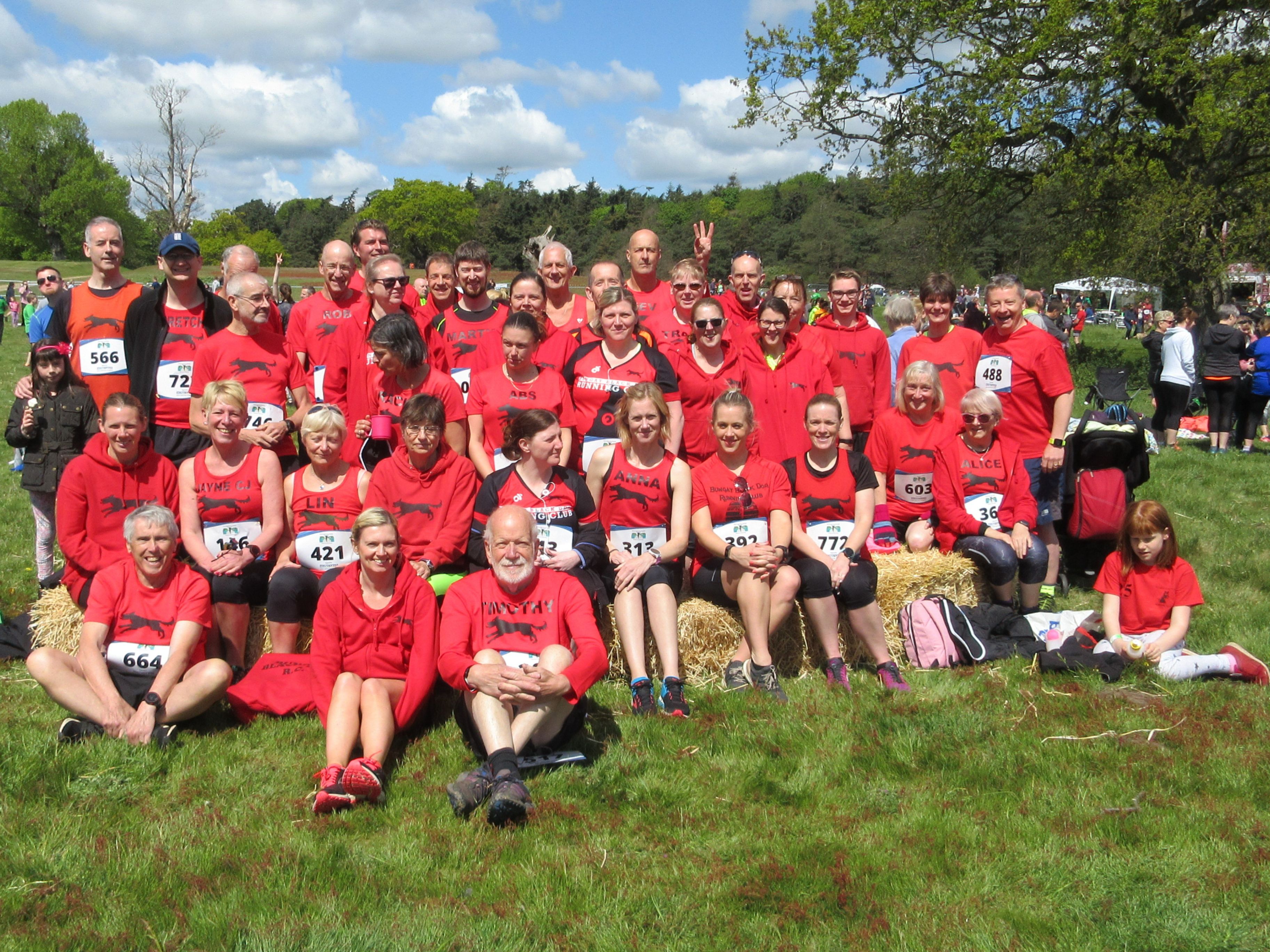 Essex & Halstead marathon
Jody Donaldson reports:
Sunday saw me and a number of other Black Dogs running this tough course.  As I ran 18 miles yesterday perhaps I found it tougher than most and suffered at the end.  A great event with awesome marshals and lots of cheers along the route. A very hot day so sponges were most welcome along with ice-pops from some lovely children. 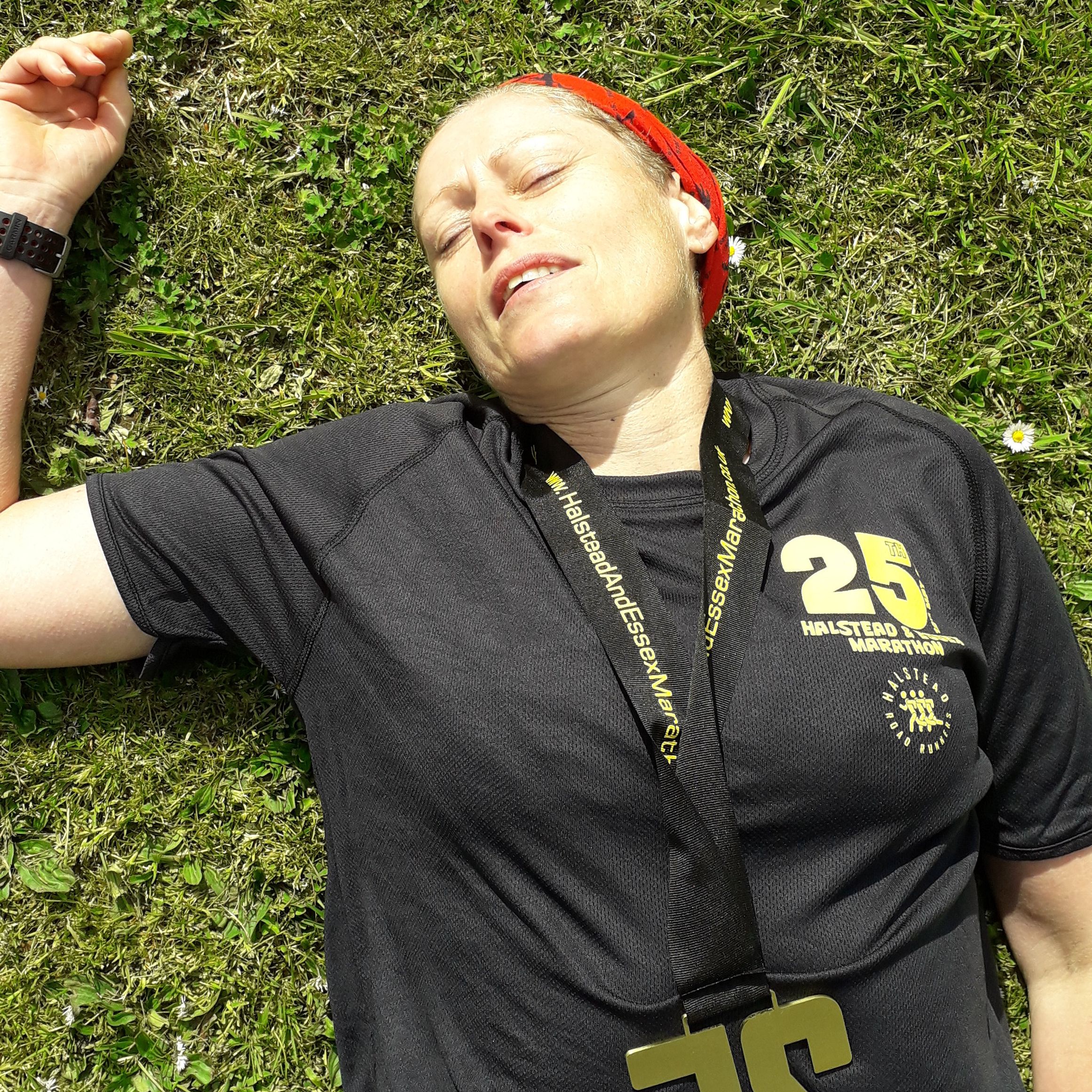 Rachel’s 100th
The editor reports:
Rachel Hirst celebrated her 100th parkrun at Gorleston Cliffs yesterday; there was a good turnout of Black Dogs who enjoyed cake on the seafront. 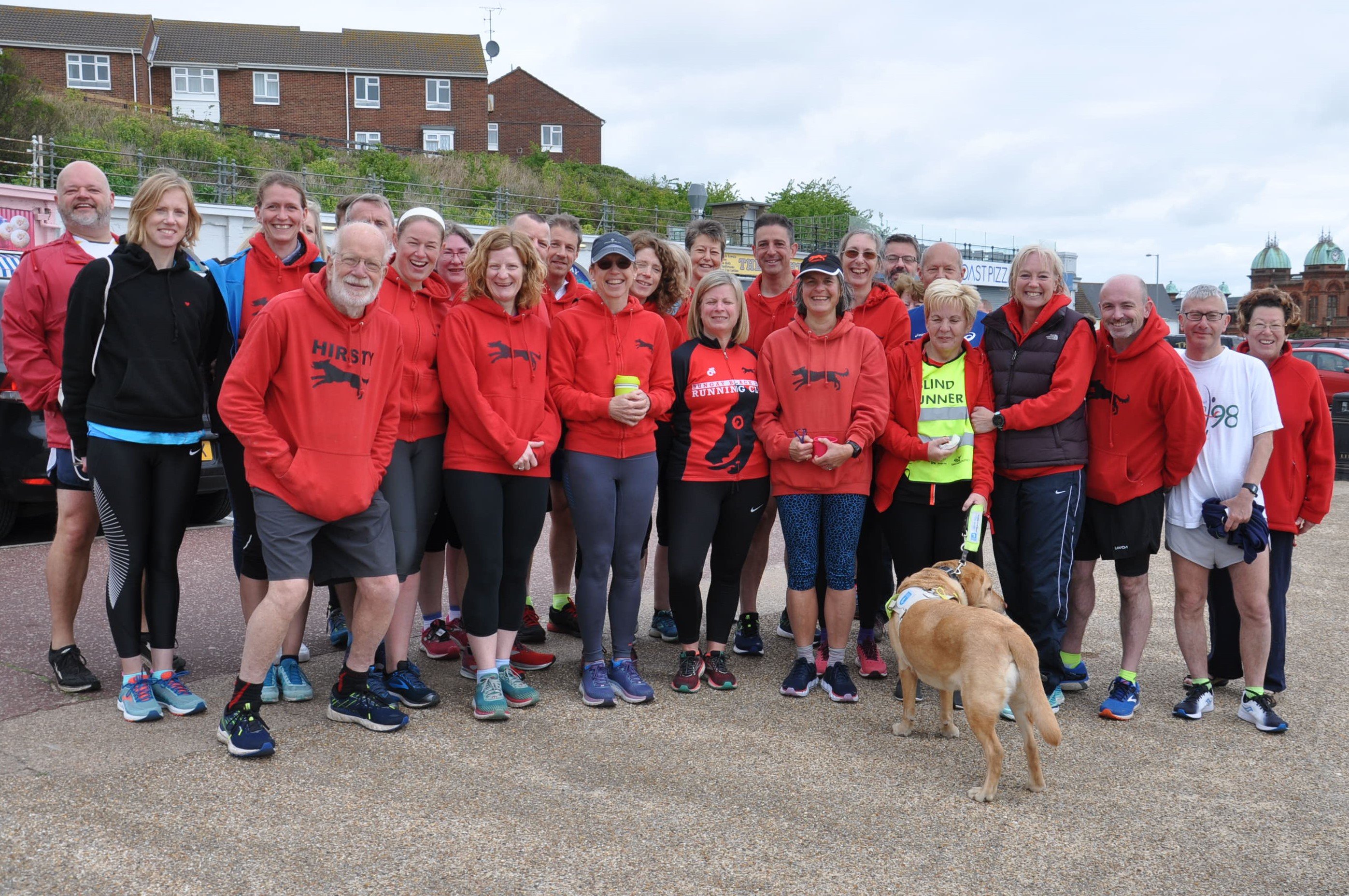 Crowle 10k
Terry Garrity reports:
Hazel, daughter Katie and I competed in this 10k today (Sunday) on a lovely undulating course in Worcestershire. The weather was beautiful with clear blue skies, no wind and closed roads.  Hazel was 2nd female over 50 in 50.37, Katie was 2nd female vet 35 in 44.17 and I finished in 44.58.  Definitely a race to add to next year’s calendar.

Run Gatwick
Alice Kirk reports:
Myself and Stuart supported my sister Lauren and 25 of her British Airways cabin crew colleagues who were running this event in memory and to raise funds for a memorial outside gym for Lauren’s best friend Sam who was tragically killed on Christmas Day. Sam loved running, triathlons and unicorns, so it only seemed only right for everyone to do this event. Stuart and I did the half in 1.59 and 2.10 respectively, it was really warm sunny day, a very undulating course on closed roads, with amazing marshals and a brilliant medal and tee shirt as a reward. 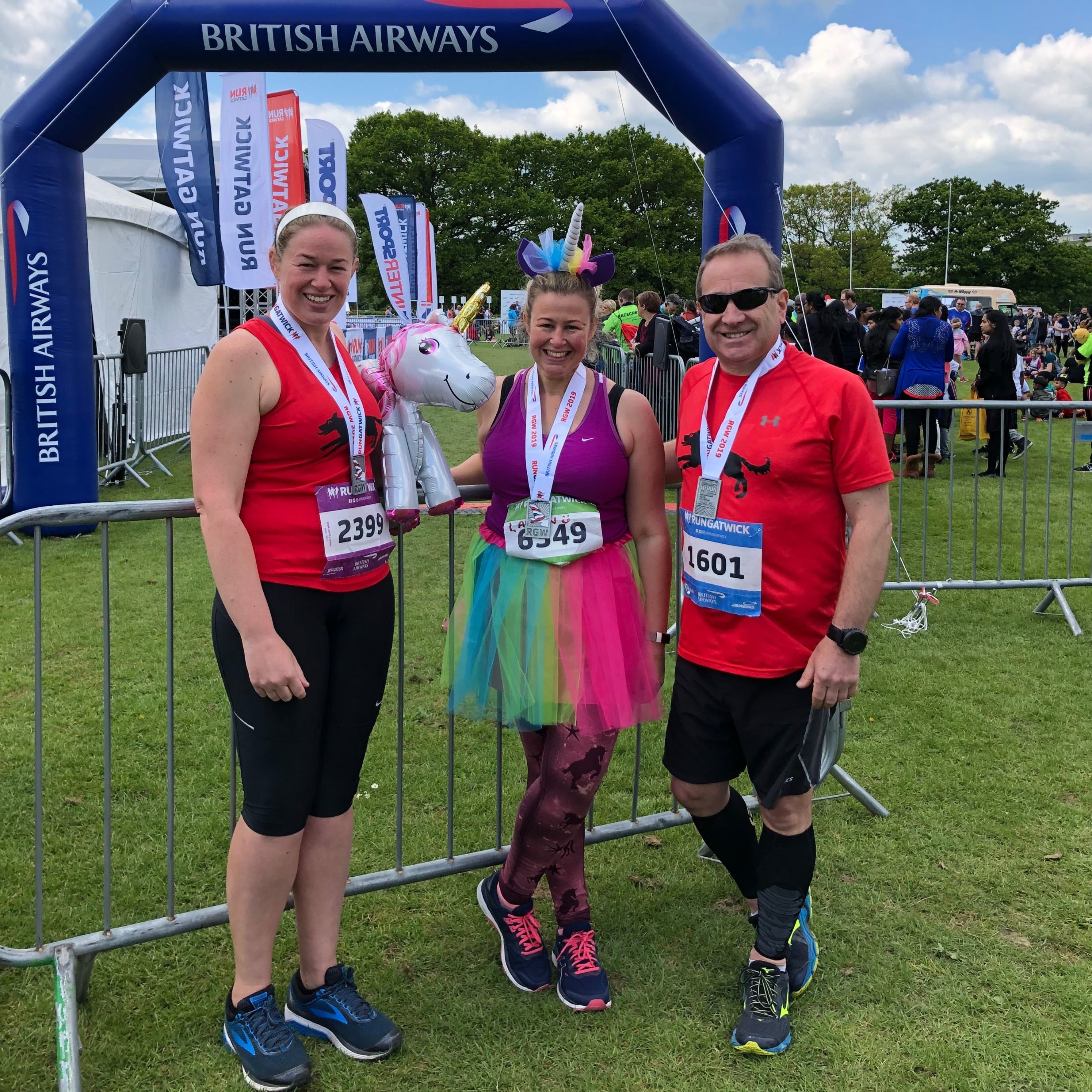